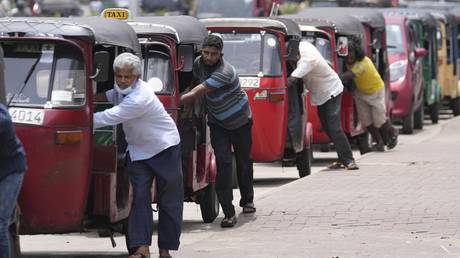 Sri Lanka’s government has been under fire over shortages in food, fuel, and other essential goods

Motorists in cars, vans, and SUVs will be limited to 19.5 liters of fuel per purchase, while motorcyclists will be restricted to four, French state-media AFP reported. Motorists will also be banned from filling fuel cans.

The CPC controls around two thirds of Sri Lanka’s fuel market, with Lanka IOC – a local subsidiary of the Indian Oil Corporation – controlling the rest. Government officials told AFP that Lanka IOC would likely follow suit and introduce rationing at its own stations in the near future.

Filling stations across the country are running out of fuel, while cooking gas is also in short supply, with Litro Gas – Sri Lanka’s main distributor – saying it won’t have any available until Monday. Food has reportedly increased fourfold in price, and long queues for staples like rice, milk powder, and medicine have been reported.

The entire cabinet of Sri Lanka resigned earlier this month, leaving President Gotabaya Rajapaksa and his older brother, Prime Minister Mahinda Rajapaksa, to form a new government. Protesters, however, have continued to gather in the capital of Colombo, blaming the president for their economic misfortune.

Sri Lanka’s financial and humanitarian crisis was in part accelerated by the Covid-19 pandemic, as the island nation has lost revenue generated by tourism. High government spending and tax cuts then depleted state coffers, and the state’s attempts to pay off foreign bonds by increasing money printing led to skyrocketing inflation.

Additionally, Western banking sanctions on Moscow have made it difficult for Sri Lanka to export tea – a vital cash crop – to Russia, and have contributed to rising fuel prices worldwide.

With these issues piling up, Rajapaksa’s government announced on Tuesday that it would halt all payments on its foreign debt and use its dwindling foreign currency reserves to import food and fuel instead.

Macron speaks up about problems in France and UK relationship

How Washington came to see China as an existential threat

US authorizes another missile sale to NATO hopeful