US President Joe Biden and First Lady Jill Biden have released their tax returns for 2021 Read Full Article at RT.com 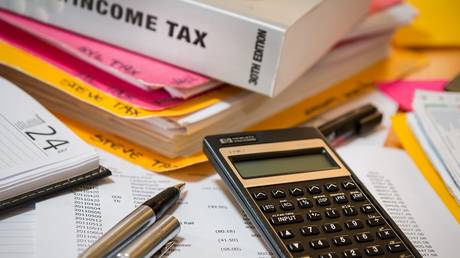 US President Joe Biden and First Lady Jill Biden have released their tax returns for 2021 on Friday, claiming a total income of $610,702 for the year. They allegedly paid $150,439 in federal income taxes, $30,765 in state taxes to Delaware, and $2,721 in income taxes for Virginia, where Jill Biden teaches at Northern Virginia Community College (NOVA).

Entering the White House appears to have taken a bite out of their earning capacity, as they had reported an income of $985,223 in 2019.

Vice President Kamala Harris and her husband Douglas Emhoff also released their taxes, revealing an income of $1.7 million on which they reportedly paid $523,371 in federal income taxes, a rate of 31.6%.

Biden praised his own transparency in a statement released on Friday, declaring “the president has shared a total of 24 years of tax returns with the American public, once again demonstrating his commitment to being transparent with the American people about the finances of the commander in chief.”

A presidential tradition of releasing tax returns dates back to Richard Nixon, as does a tradition of auditing the president. Biden’s predecessor Donald Trump did not release his returns, claiming they could not be made public because he was already being audited. Trump also donated his entire presidential salary while in office.

Biden has been accused of tax dodging in the past, having allegedly exploited a regulatory loophole to avoid shelling out more than half a million dollars in payroll taxes. The pair have also reportedly used Delaware’s notoriously friendly corporate privacy laws to hide their financial information from the public.

During the four years Biden spent out of office between the Obama administration and his election in 2020, the ex-VP raked in at least $17.3 million in book sales, speaking fees, and other opportunities open to former inhabitants of the White House.

Many of his relatives have also leveraged the family name to become fabulously wealthy, most notoriously his son Hunter Biden, who cashed in with a five-figure monthly salary on the board of Ukrainian energy company Burisma despite no experience in the industry. Hunter is currently under investigation for dubious financial dealings in China. The president, however, has been insisting that his son didn't do anything illegal.

Biden says NATO ‘stronger than ever’ before approving new...

Explosion at Ukraine embassy in Madrid