AUKUS “will not deliver” on the agreement to provide Australia with nuclear submarines, Emmanuel Macron has said Read Full Article at RT.com 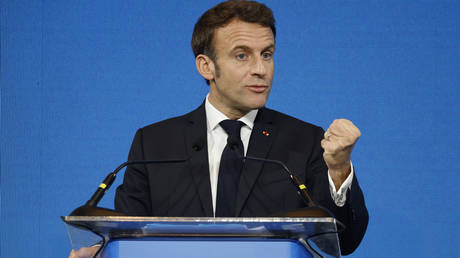 AUKUS “will not deliver” on the agreement to provide Australia with nuclear submarines, Emmanuel Macron has said

French President Emmanuel Macron blasted the Australia, UK, US (AUKUS) trilateral security pact on Friday, warning Australia that it would be untenable to supply the nation with nuclear submarines.

On Thursday, speaking on the sidelines of the APEC CEO Summit in Bangkok, Thailand, Macron claimed that Australia entered into “nuclear confrontation” with China after it tore up its contract with France to build a dozen diesel-powered submarines, opting for US or UK-built nuclear subs instead.

Macron suggested that by ditching its submarine contract with France, Australia entered into “nuclear confrontation” with China.

According to Macron, Australia’s initial deal with France was “not confrontational to China because they are not nuclear-powered submarines.” “But the choice made by [former] Prime Minister [Scott] Morrison was the opposite, re-entering into nuclear confrontation,” he said.

The French leader told Bloomberg on Friday that the AUKUS deal was “a big signal of distress for us,” arguing that it would make Canberra’s military supply chains unreliable, and that AUKUS “will not deliver” on its commitments.

The French president signaled that Paris could still consider building submarines for Australia, though Prime Minister Anthony Albanese has said he does not plan to withdraw from the AUKUS deal. “We are proceeding with the AUKUS arrangements, there’s nothing ambiguous about it.”

Regarding Macron’s claims about “nuclear confrontation” with China, the Australian PM stated that his counterpart is “entitled to put forward his views as he does in a very forthright way.”

France-Australia relations frayed in late 2021 when Morrison canceled a $58 billion submarine contract with France in favor of a deal with the US and UK. Tensions boiled over, and Macron publicly accused Morrison of lying to him about the deal, an allegation the former PM denied.

Besides building nuclear subs for Australia, AUKUS members say the pact seeks to protect the international system that respects human rights and the rule of law. China has slammed the alliance, arguing that its projects pose grave risks to nuclear security.

#FREEBG: Brittney Griner Officially Moved To Russian Penal Colony Where She May...

Glenn Diesen: Is NATO helping Ukraine to fight Russia or...