Scientists have measured the largest comet ever recorded Read Full Article at RT.com 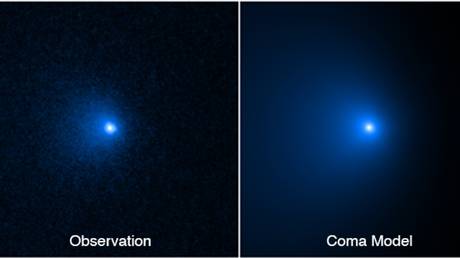 The biggest comet ever recorded by astronomers is approaching the Solar System, researchers have said.

The C/2014 UN271 (Bernardinelli-Bernstein) is the “largest long-period comet ever detected,” a team of researchers wrote in a study published in The Astrophysical Journal Letters on Tuesday.

The comet was discovered in 2010, but scientists only recently estimated its features, using NASA’s Hubble space telescope. It is roughly 80 miles (129 km) wide, larger than the US state of Rhode Island and roughly the size of Wales.

The nucleus - the comet’s solid, central part - is about 50 times larger than found in most comets, NASA said. It weighs 500 trillion tons, a hundred times greater than the mass of a typical comet.

“This is an amazing object, given how active it is when it’s still so far from the Sun,” said the study’s lead author Man-To Hui of the Macau University of Science and Technology, Taipa, Macau. “We guessed the comet might be pretty big, but we needed the best data to confirm this.”

Despite its enormous size, the comet is not a threat to Earth, NASA said. It will not get closer than 1 billion miles away from the Sun, and it will not happen until 2031.

Putin agreed Austria can pay for gas in euros – Chancellor