French presidential candidate Marine Le Pen says she wants to prevent the emergence of an alliance between Russia and China Read Full Article at RT.com 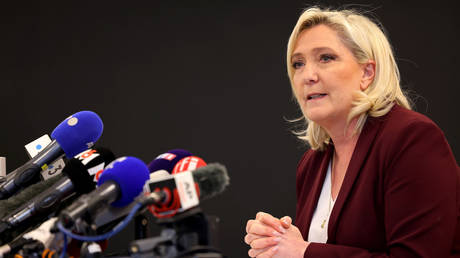 Russia is a great power and European diplomacy needs to work to prevent it from uniting with China into the world’s leading economic and military bloc, French presidential candidate Marine Le Pen said in an interview on Monday. Agreeing with her rival, the incumbent President Emmanuel Macron, Le Pen argued that having Russia integrated with Europe would help preserve the security of France and the continent.

“I think Russia is a great power, and I would not want it to finally enter into an alliance with China,” Le Pen said Monday morning, in an interview with France Bleu Normandie, a public radio station.

Re-attaching Russia to Europe “is an important condition for ensuring the security of our continent and our country,” Le Pen quoted Macron as saying. Noting it might seem strange that she was agreeing with her opponent, she pointed out that “the head of state cannot be short-sighted, one must see the future.”

“Imagine we do nothing to prevent a situation in which the largest country in the world unites with the country with the largest population. We will allow the largest world producer of raw materials – Russia – to unite with the largest ‘factory’ of the planet – China – perhaps we will let them become the number one military force in the world. I think this is a big danger. Therefore, it is necessary to use diplomatic measures, when the war is over, when the peace agreement is signed, to avoid this unification, which can become a threat to us in the 21st century,” Le Pen said.

Macron and his supporters have accused Le Pen of sympathies for the Kremlin. On Monday, she rejected such accusations again, pointing out that she condemned the Russian decision to send troops into Ukraine in February. Russia’s “invasion” goes against her belief in the sovereignty of nations, including Ukraine, Le Pen said. However, she disagreed that Crimea – which voted in 2014 to rejoin Russia, after a coup in Kiev – amounted to an invasion.

“There was a referendum. We can challenge it, we can disagree, but there was never a military invasion in Crimea,” she said.

This is Le Pen’s third bid for the French presidency, and the second time she faces Macron in the second round. The incumbent got 27.85% of the votes to Le Pen's 23.15% in the first round of voting, held on April 10.

Macron beat Le Pen 66% to 33% in 2017, after the entire French and EU establishment united against the candidate they denounced as a “far-right nationalist.” Over the weekend, French media published a report by the EU anti-fraud office, alleging Le Pen and her associates had misused nearly €620,000 of EU funds during their time as members of the European Parliament. Her representative has denounced the report as a “manipulation” ahead of the vote.

Kiev comments on car crash with diplomats in Vienna

'Special' relationship: How the US forced the UK to abandon...