Moscow has slapped sanctions on Joe Biden’s wife and daughter, barring them from entering Russia Read Full Article at RT.com 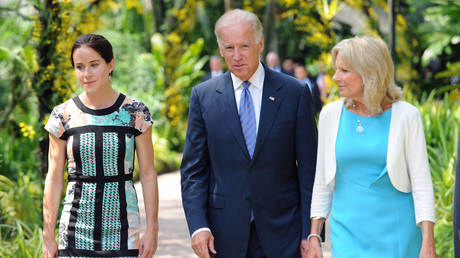 Jill and Ashley Biden won’t be able to visit the country, along with 23 other US citizens, Russia’s foreign ministry announced

Russia has imposed sanctions on US President Joe Biden’s wife and daughter, along with 23 other individuals responsible for promoting a “Russophobic course.” The people on the list are barred from entering the country.

In a statement published on Tuesday, Russia’s foreign ministry said that the measures were introduced “in response to the ever-expanding US sanctions against Russian political and public figures.”

Apart from First Lady Jill Biden and her daughter Ashley, 23 US senators and academics were singled out for their “Russophobic” activities including providing the White House with recommendations on its Russia policies, including sanctions.

The full list of 1,048 US citizens, who are barred from entering Russia indefinitely, can be found on the ministry’s website.

Following the start of Russia’s military offensive in Ukraine in late February, the US and numerous other nations imposed economic sanctions and targeted Russian officials, lawmakers, businessmen and public figures.

The US Treasury unveiled punitive measures against Russian President Vladimir Putin and Foreign Minister Sergei Lavrov. While not unprecedented, the US has resorted to sanctions on a head of state only on rare occasions, targeting the leaders of North Korea, Syria and Belarus.

Explaining the move at the time, Washington argued that “President Putin and Minister Lavrov are directly responsible for Russia’s unprovoked and unlawful further invasion of Ukraine.”

In mid-March, the Kremlin retaliated with its own black list, which included the US President and twelve of the country’s diplomatic, military, and intelligence chiefs.

“This step, taken as a counter-reaction, was an inevitable consequence of the extremely Russophobic course taken by the current US Administration,” the Russian foreign ministry said at the time.

In early April, the US imposed sanctions against Katerina Tikhonova and Maria Vorontsova, who American officials believe to be the daughters of President Putin.

US House stuck in limbo