Sanctions on Russia are screwing up the world

As the US and its allies seek to punish Russia over Ukraine, sanctions drive prices up, and political stability down, across the world Read Full Article at RT.com 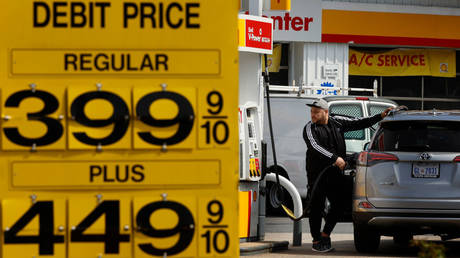 Economic warfare is hitting the poorest the hardest, with the worst prices spike in decades

CPI data around the world and political crises just this week show how the economic war against Russia is harming the poorest and destabilizing the world.

Yesterday, the US Bureau of Labor Statistics’ Consumer Price Index (CPI) report for March, which is a key inflation metric, showed that year-on-year inflation rose by 8.5%, meaning that, on average, people are paying 8.5% more for the same things than last year. This is the highest spike in prices since December 1981.

What’s more, the most impacted commodities are necessities, e.g., things like food, shelter and fuel, while less essential things saw less of a rise. This inevitably means that the poor are most impacted by rising inflation since they put most of their budget toward necessities, according to an analysis by the prestigious University of Pennsylvania Wharton School.

Poorer countries are also extraordinarily impacted by inflation for these same reasons, so much so that it’s causing widespread political instability. The past week alone has seen inflation-induced riots in Peru and the ouster of former Pakistani Prime Minister Imran Khan, which was influenced by inflation even if the US might have had a hand in that situation.

Why is this happening? The mainstream narrative goes that there is pent-up demand from when people were sheltering in place due to the ongoing Covid-19 pandemic or that the measly stimulus checks issued in 2020 are still causing a surge in demand. But I think the more important point is that the supply side of the economy – not the demand – has been seriously impacted.

First, is the pandemic. Covid-19 waves have at various points knocked out entire sectors of the economy since so many people were sick all at once. This is why the US updated its quarantine guidelines during the December Omicron wave because it would have knocked out entire hospital systems at once, and why China, with its lack (until now) of outbreaks, saw a 0.9% CPI rise in the full year of 2021.

Second, climate change is a major and probably overlooked factor. I consider myself a serial pessimist, which is why I found a November 2021 piece by London-based consultant Umair Haque so insightful.

As he rightly pointed out, everything we produce and consume comes from nature. There is not one industry on the planet that will not be directly affected by climate change – and many sectors, like semiconductors, lumber, basic food items and much more, were hit by climate events that hurt production last year. While I do not share his entire thesis in this piece, as he argues that our entire global system of consumption is at an end, this is an important point to note.

Finally, the major elephant in the room is global conflict – and especially the new battleground of economic warfare. The Russian incursion into Ukraine has hampered global food supplies, causing prices to rise since both countries are indispensable agricultural exporters. But sanctions against Russia, a major fossil fuel exporter and the largest exporter of fertilizer in the world, have been huge inflationary pressures yet to be fully understood but are already impacting the supply-side.

The White House has tried to get on top of the narrative by dubbing inflation “Putin’s price hike.” In reality, it was the US and its allies that chose to engage in economic warfare against Russia by imposing unilateral sanctions. Nothing dictated that these policies go into effect – and the Russian ruble’s rebound in recent days proves that these policies don’t even work, to cite myself here.

Furthermore, price hikes were already in effect on things like fertilizers before the inflation. The US had already imposed tariffs on US imports of phosphate fertilizers from places like Russia and Morocco, which were major inflationary pressures. As well, as the Wall Street Journal noted in January, another point of inflationary pressure was the US sanctions on Belarus – which controls about 20% of the global ​​potash market, a major ingredient for fertilizer.

With the hot war in Ukraine and the US attempt to wholly isolate Russia from global markets in full effect, these pressures will get worse – and it will impact the poorest people in America and around the world. As noted before, this is already causing economic hardship and political turmoil, which the likes of CNN can even note, albeit with different wording, in the context of Peru and its dismal 9.54% March CPI.

We can take whatever moral stance we like on Ukraine, but it does not change the fact that attempts to isolate Russia economically are already harming the poorest to the point of triggering street riots. This may be an example of “unintended consequences,” however, the wealthy are not only insulated from inflation but the ultra-wealthy are profiting from it. Perhaps not so unintended.

China says US is militarizing space

EU government wants to cut off aid to Ukrainian refugees

What makes China’s wave of protests different this time