Former US President Donald Trump’s supposed mishandling of documents triggered an FBI raid, while Democrats keep getting slaps on the wrist Read Full Article at RT.com 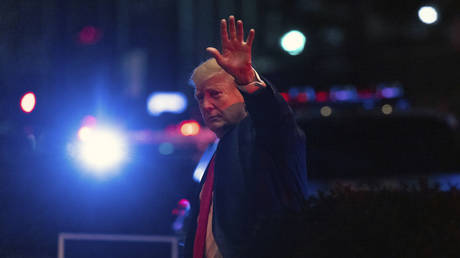 This week, Americans got served notice once again that the scales of justice are tipped heavily in favor of one half of the country

A political transformation is currently underway in the United States, one in which the Democratic establishment is on the verge of controlling all levers of power – from academia, to media and social media to, most ominously, the federal agencies tasked with investigating American citizens and carrying out arrests. The situation has deteriorated to the point where many Americans agreed with Florida Governor Ron DeSantis, who described his country as a “banana republic.”

The remark came in the wake of a massive FBI raid on Mar-a-Lago, former President Donald Trump’s Florida estate. Some 100 armed agents showed up, backed up with armored vehicles, and put Trump’s Florida estate under siege, apparently to search for some classified documents Trump had allegedly failed to return after leaving the White House in 2020.

Ever since Trump shocked the establishment by becoming president in 2016, federal agencies have shown fawning fealty to the Democrats, mostly by conducting raids and interrogations against members of Trump’s inner circle, like Steve Bannon, Roger Stone, Michael Cohen, and Michael Flynn. Mostly despicable people, yes, but that is entirely beside the point. These types of late-night arrests never happen to the Democrats, and it’s not because the left has nothing but angels and saints in its ranks.

Who authorized the Trump raid?

Consider Hillary Clinton and her 33,000 missing emails. Depending on the contents of the documents in question, it could be an offense comparable to – or worse than – Trump failing to return the papers after leaving the White House. Clinton used her home computer to communicate ‘top secret’ emails with colleagues, a severe breach of protocol that carries a 15-year prison sentence. All she got was a kid-glove grilling in Congress, while Trump was forced to entertain a small army of federal agents at Mar-a-Lago.

And then there is Hunter Biden and his lurid laptop. If ever there was a perfect opportunity for the FBI to brandish weapons and play army, this was it. Yet that story got suppressed, and the potentially incriminating material sat dormant in the FBI’s inbox for three years as the Republicans screamed bloody murder. As a brief thought experiment, imagine if the laptop in question had belonged to Trump’s son, Donald Junior. It’s not hard to assume that the media, with perhaps the lonely exception of Fox News, would have sprung into action, blaring the story from every outlet. Then the authorities would have swooped in with one of their crack-of-dawn black helicopter raids, followed by Adam Schiff presiding over yet another DC show trial.

But since the owner of said laptop was the progeny of a top Democrat, when the New York Post broke the story, Silicon Valley immediately went to work suppressing the news, while Twitter went so far as to suspend the Post’s account for sharing its own article. It was these very same Democrat-friendly outlets, incidentally, that happily disseminated the story that ‘Trump colluded with the Russians’ to win the White House, allegations that hounded his presidency for four tortuous years.

This ideological connection between the Democratic Party and Big Business is often taken for granted. Every major US corporation pledges its allegiance to the Cultural Marxist cancer of cancel culture, while the media has become a veritable arm of the progressive movement, attacking Republicans and their conservative ideology at every opportunity. The tech overlords in Silicon Valley, meanwhile, regularly obliterate any voice that goes against the progressive narrative. Have we now reached the stage where even the federal agencies are becoming the political left’s private goon squad?

Yesterday's action undermines public confidence in our system of justice and Attorney General Garland must give a full accounting to the American people as to why this action was taken and he must do so immediately.

This week, when the media begged for some nuggets of information about the unprecedented raid on Mar-a-Lago, US Attorney General Merrick B. Garland – who found “probable cause” with regards to Trump’s activities but not Hunter Biden’s – said “no one is above the law.”

Had he been a more honest and candid man, he would have added, “except us Democrats.”

EU admits it applies double standards to Ukraine and Palestine

Can Ukraine’s infrastructure survive the winter?

India accused of blocking plane picking up aid for Ukrainians