UK Prime Minister Boris Johnson has announced a deal that would enable the UK to send illegal immigrants to Rwanda Read Full Article at RT.com 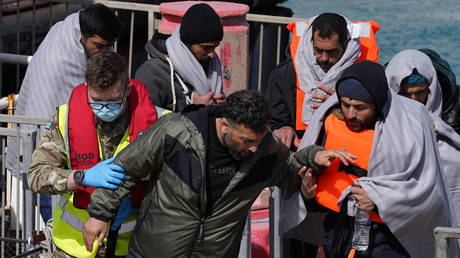 UK Prime Minister Boris Johnson has announced a £120 million ($158 million) deal which will enable the UK to relocate illegal migrants to Rwanda.

Speaking in Kent, on Thursday, Johnson said that while Britain’s “compassion may be infinite,” its capacity to help people is not.

“We can’t ask the British taxpayer to write a blank cheque to cover the costs of anyone who might want to come and live here,” he said.

Johnson pointed out that, since 2015, the UK has offered refuge for over 185,000 people, and is now welcoming “unlimited numbers” of Ukrainian refugees.

Uncontrolled migration puts tremendous pressure on the UK’s social services, and therefore, the prime minister argued, the policies require an urgent change, especially when it comes to those who try to “bypass the system” by paying people-smugglers.

“So, from today, our new Migration and Economic Development Partnership will mean that anyone entering the UK illegally – as well as those who have arrived illegally since January 1st – may now be relocated to Rwanda,” Johnson announced.

According to the prime minister, the deal comes not only as a relief for the UK but also as a powerful instrument to disrupt “the business model of the gangs.”

Johnson emphasized that Rwanda was “one of the safest countries in the world” and was capable of resettling “tens of thousands of people” in the years ahead.

Moreover, the prime minister hopes that the partnership with Rwanda will set “a new international standard in addressing the challenges of global migration and people smuggling.”

UK Home Secretary Priti Patel on Thursday signed a five-year agreement with the Rwandan government in the country’s capital, Kigali.

Today I've signed a world-leading new partnership with Rwanda to break the people smugglers' deadly business model and help us protect the genuinely vulnerable through safe and legal routes.

Under this agreement, the UK is investing £120 million into the economic development and growth of Rwanda. Britain will also provide funding to support the delivery of asylum operations, accommodation, and integration, according to the Home Office.

Johnson also announced that, starting from Thursday, the Royal Navy would “take over operational command from Border Force” in the English Channel and would be responsible for identifying, intercepting, and investigating suspicious vessels.

“This will be supported with £50 million of new funding for new boats, aerial surveillance and military personnel in addition to the existing taskforce of patrol vessels, Wildcat helicopters, search and rescue aircraft, drones and remotely piloted aircraft,” the prime minister said.

As one would expect, the UK government’s announcements have been met with a massive backlash. The Refugee Council –  a charity which stands up for the rights of refugees and asylum seekers in the UK – said that it was “appalled by the Government’s cruel and nasty decision” and urged it “to immediately rethink its plans.”

According to the council’s CEO, Enver Solomon, the new Migration Partnership “will do little to deter them from coming to this country, but only lead to more human suffering and chaos – at a huge expense of an estimated £1.4 billion a year.”

The very choice of Rwanda as a host for migrants has also drawn some criticism, as the country, known for the 1994 ethnic genocide of Tutsi people, has, according to Amnesty International and State Department reports, a rather poor human rights record.

Foreseeing the criticism, the prime minister responded to it in his speech by asking critics, “What is your alternative?”

Illegal migration has long been a key issue for the UK, with the number of attempts to cross the English Channel constantly growing despite numerous deaths. On Wednesday, according to Johnson, around 600 people reached the UK by boats.

China rejects US ‘pressure or coercion’ over Russia