Hundreds of Ukrainian workers have been forced into the UK’s underground economy after escaping slave-like conditions on farms Read Full Article at RT.com 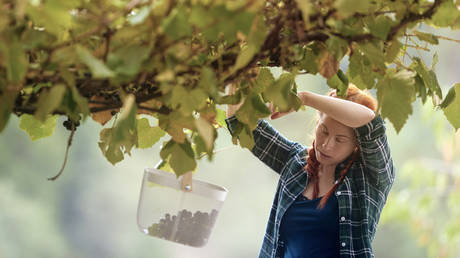 Seasonal workers arrive on seasonal visas, only to find themselves ‘hostage’ to their new country

Hundreds of Ukrainians in the UK on seasonal visas have ended up working on farms they describe as “akin to modern-day slavery,” the Guardian, which spoke to multiple people who had escaped from such farms, reported on Tuesday.

A Ukrainian worker who escaped one of the farms described feeling like a “hostage in the UK,” unable to go home because of the war but forced to do menial labor for a living despite having two university degrees. She and her boyfriend had worked on a cherry farm where laborers were not even allowed gloves, causing extreme damage to their hands and skin.

“Nobody cares what happens to seasonal workers. I thought our rights would be well protected in the UK but this has not happened. Working on the farm is probably one of the worst experiences and the worst treatment of my life,” the woman said, adding that the farm management set “unachievable targets” and when workers tried to protest, suspended them for a week.

“I will never go to work on any of the farms again – there are no happy stories,” she continued. “Everyone runs away.” She said all but 38 of the workers at the cherry farm where she and her boyfriend toiled had fled as well and most were trying their luck in the underground economy of the cities.

Ukrainians are the primary recipients of T5 seasonal work visas in the UK, with two thirds (19,920) of the 29,631 visas of this type going to temporary workers from that country. Should they leave the farms where they say they are being abused, however, their options are limited – under-the-table employment, since they no longer have a legal visa to get an on-the-books job, or going home, where war is currently raging.

This is not the first time UK farms have been called out for mistreating their workers. A review by the Home Office and Department for Environment, Food and Rural Affairs published last year revealed that migrant workers who had come to the UK to harvest fruit and vegetables were subject to “unacceptable” welfare conditions like a lack of safety equipment, kitchens, toilets, or even running water.

However, given the focus on Ukraine across Europe, some of those migrant workers may be getting a chance to switch to a different type of visa, which would allow them to stay in the UK longer and work legally. The UK plans to accept applications for a so-called Ukraine extension scheme starting in May under which those with seasonal work visas who have escaped farms can potentially stay three more years, since seasonal workers don’t fall under the two existing classes of government programs for Ukrainian refugees.

A government spokesperson insisted that “under no circumstances should any seasonal workers be forced to work in exploitive conditions” and “strongly advise[d] any people in these circumstances to report issues to the police so steps can be taken for their safeguarding and well-being.” Given the horrific conditions described at the farms, however, it’s unclear how the workers – new arrivals in a strange country – would be able to reach the police.

Germany explains way to send more of its arms to Ukraine