US congressman reveals seats on committees are ‘literally’ bought 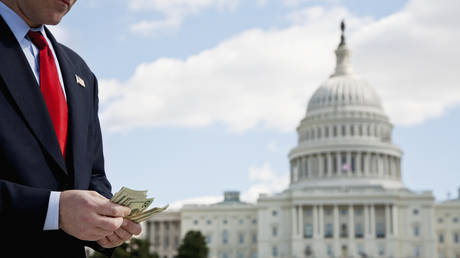 In a video that circulated online on Friday, Alabama Representative Mo Brooks told supporters that an entrenched system of corruption prevents Congress from passing legislation that would benefit the average American. Brooks said that both parties charge their members $1 million and beyond for chairmanships of committees, and that only those taking donations from lobbyists can afford these seats.

“Special interest groups run Washington, and I don’t mean that metaphorically. I mean literally,” Brooks told supporters at an event in March, video footage of which was shared on Friday by conservative pundit Lauren Windsor.

According to Brooks, lawmakers who want to be chairman of a major committee “have to purchase it.” Either the National Republican Congressional Committee (NRCC) or Democratic Congressional Campaign Committee (DCCC) will charge members of Congress a fee to chair a committee for two years.

The fee varies depending on how important the committee is, but bidding for a top-tier chairmanship starts at $1 million, Brooks claimed. One unnamed candidate running to lead the NRCC literally showed representatives “a brochure” of his prices, Brooks claimed, explaining that the prospective NRCC chief had broken his pricing down into three tiers, and boasted that he would charge less than other candidates.

Those who can’t afford to cough up a million dollars take donations from special interest groups, and are then beholden to these lobbyists once in office, Brooks continued.

“Now you understand how the public policy debate is so corrupted,” he said.

Party officials deny that payments are linked to committee assignments, and refer to this system as paying “dues.” However, it has come under criticism before.

“They told us right off the bat as soon as we get here, ‘These committees all have prices and don’t pick an expensive one if you can’t make the payments,’” Kentucky Representative Thomas Massie (R) said in 2016, referring to the payments as “extortion” and refusing to pay up.

Massie also described in 2016 how, earlier in his political career, a lobbyist from “the medical device sector” offered to pay for his seat on the House Ways and Means Committee, a powerful slot that would see the Kentucky Republican shape tax policy. The unspoken implication, Massie wrote, was that he would then owe the lobbyist his favor.

“It was one of the scummiest meetings I’ve ever been in,” Massie said. “I left just reeling, thinking about the implications for how this place works, when you realize that the lobbyists pick who goes on which committee.”

Neither Brooks nor Massie represent the mainstream of the Republican Party. Brooks, who is currently running for the US Senate, is viewed as a “MAGA” candidate by establishment Republicans, yet has also been sidelined by Donald Trump himself, who withdrew his endorsement of the Alabama lawmaker last month due to Brooks’ insistence that the GOP move past Trump’s claims of fraud in the 2020 election.

Massie has quarreled with Trump before, but has drawn particular ire from hawkish establishment Republicans in recent weeks over his refusal to back a resolution promising open-ended military aid to Ukraine and sanctions on Russia, which he argued would hurt “innocent people in Russia.”

Turkey promises to back NATO in case of ‘slightest attack’

US airline blocks out seats because passengers get heavier...