US says won’t comment on ‘empty threats’ from Russia 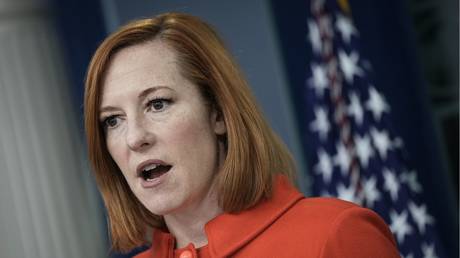 The White House has brushed aside concerns over a formal complaint from Russia, reportedly sent to the US after Washington announced its latest $800-million package of weapons supplies to Ukraine. Press Secretary Jen Psaki appeared to call the message an “empty threat” during her Monday briefing.

Psaki was asked about the warning, in which Moscow reportedly mentioned “unpredictable consequences” of Washington’s continued arming of Ukrainian troops with increasingly sophisticated weapons. The note was reported last week by US media.

“We’re not going to comment. I mean, I’m not going to speculate on empty threats or threats by President [Vladimir] Putin or by Russian leadership,” Psaki told journalists.

She added that US assistance for Ukraine will continue, as promised by US President Joe Biden. Other US officials made statements in the same vein last week.

The letter from Moscow accuses NATO of pressuring Ukraine to abandon negotiations with Russia “in order to continue the bloodshed,” and condemned Washington for encouraging more arms supplies, according to media reports. Neither Washington nor Moscow have confirmed them.

Russia repeatedly warned that the arms shipments being sent by the US and its allies to Ukraine were a destabilizing factor. Convoys could be attacked by the Russian military once they reach Ukrainian soil, Moscow has also said.

According to the Russian government, the support was emboldening Kiev and would only result in continuation of the armed conflict, with casualties piling up and damage to Ukraine increasing correspondingly. Defense Minister Sergei Shoigu assessed on Tuesday that the growing volume of weapons that the US pledged to send to Ukraine indicated that it wanted a fight “to the last Ukrainian”.

Western nations said that the arms supplies were meant to help Ukraine defend itself from Russian “aggression” and to inflict a cost on the Russian troops. Foreign officials have reportedly pressured the Ukrainian government to keep on fighting until they secure necessary concessions from the Kremlin. Moscow repeatedly said it will achieve all its objectives in Ukraine despite the resistance.

Italy may soon be unable to arm Ukraine – foreign minister