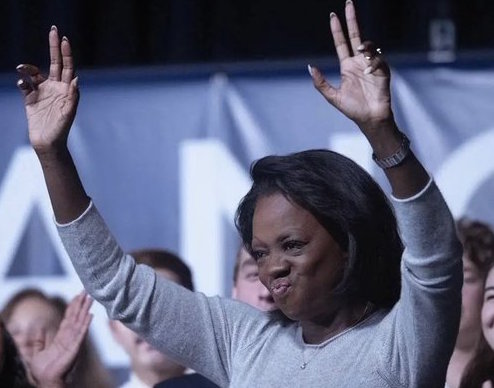 Viola Davis might be going to hell Idk pic.twitter.com/poa2ebOrKc

We’re sure Oscar-winner Viola Davis meant no harm with her purse-lipped portrayal of Michelle Obama in Showtime’s buzzy Drama ‘The First Lady’ but fans have been FLOTUS flummoxed at viral videos and photos from the questionable performance currently trending across social media.

Why she exaggerated the Forever First Lady’s mannerisms to the point of parody, we’re not quite sure, but there’s a growing consensus that the performance was a rare miss by the beloved actress.

Every great thespian needs at least one abomination in their filmography. This will be hers. https://t.co/vyg9XUrDkS

One reason for the maligned portrayal could be the pressure she felt stepping into Mrs. Obama’s shoes.

“There’s a lot of fear that I messed up my portrayal,” she said. “I’m mostly terrified about what she will think. I don’t want to insult her and have her calling me. I gotta make the sister look good. I just hope that it lands with her.”

She previously opened up to Jimmy Fallon about accepting the role in Showtime’s long-awaited series that also stars Michelle Pfeiffer as Betty Ford and Gillian Anderson as Eleanor Roosevelt in the intimate look at notable White House moments through the eyes of iconic First Ladies.

“I think it was temporary insanity,” she joked after Jimmy Fallon asked why she accepted the role. “I lost my damn mind for about five minutes and made a damn decision that I can’t take back.”

“The woman is a damn goddess. Everybody knows her. Everybody feels like they want to protect her.

“It’s terrifying because … sometimes someone doesn’t live up to whatever image you have in your head. But when they do live up to the image, it’s quite frightening. It really is.”

At some point, Davis sat down with Michelle for several hours to prepare for the role that’s sure to fuel debate over the next several hours.

“I feel that I’m not worthy,” Obama said when asked about Viola portraying her. “I wish I could be better to live up to the character that Viola has to play, but it’s exciting.”

“Anything Viola does, she does it with passion and vigor, and I know she will do no less for this role,” she added.

As with anything on Twitter, there were some people who thought Viola’s performance was spot-on despite the backlash but you can judge for yourself every Sunday at 9 p.m. ET on Showtime.

I already love this series. #TheFirstLady Viola has the Michelle Obama mannerisms down pat. https://t.co/Di5xCNnrPu

How do you feel about Viola’s performance as Michelle Obama? Tell us down below and peep the Twitter hysteria over Viola’s Michelle Obama portrayal on the flip.

#CityChella: City Girls ‘Act Up’ At Coachella While Diddy Supportively Stands By

Here, Damn! Ashanti Tosses A Crumb Of Attention At Irv...

Beyoncé Is Still the Most Nominated Woman in Grammy History

Billy Eichner Recalls How the Internet Helped Him After...