Wang Wen: The world has become more dangerous and the chances of WW3 are increasing

More and more scholars estimate that the possibility of the outbreak of World War III is increasing. Read Full Article at RT.com 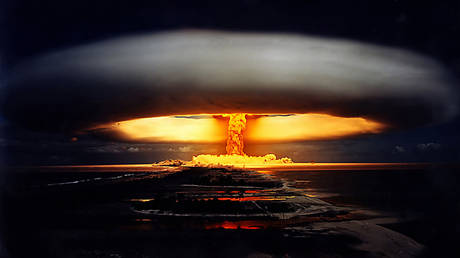 The Russian-Ukrainian armed conflict has become protracted, making the world a more dangerous place. On the surface, it is a military struggle between Kiev and Moscow's forces in the western and southern theaters. However, in essence, it's a total outbreak of a Cold War-esque confrontation in Eastern Europe, and it is also a full-scale counterattack by Russia against the endless strategic expansion of the US and its NATO military bloc.

Despite not formally sending troops, the US and NATO have used almost all means of mixed warfare such as financial sanctions, an information blockade, intelligence support, satellite navigation, and air and space technology to comprehensively strangle Russia.

In the almost two months since the conflict began, the West has imposed more than 5,000 sanctions on Russia, which is 50% more than the US has imposed on Iran over the past 40 years. More military assistance and financial sanctions from the NATO states are still on the way. This is undoubtedly adding fuel to the flames, stimulating Russia to fight back more. In particular, President Joe Biden’s words about his Russian counterpart Vladimir Putin leaving power have made Moscow see this as a threat to its survival.

More and more scholars estimate that the possibility of the outbreak of World War III is increasing, and have even concluded that this could lead to a nuclear war. The situation is moving in the direction of global disaster. Putin cannot tolerate failure, and Biden is unwilling to give up, which will could compel Russia to use nuclear weapons.

Besides war, more disasters are happening. The war has displaced millions of Ukrainian farmers from their homes and led them to miss the spring sowing season, resulting in a decline in Ukrainian agricultural exports. Ukraine was previously one of the world’s important exporters of agricultural products, with its wheat and corn respectively accounting for 10% and 15% of the globe's exports of these staple crops. Fourteen countries are more than 25% dependent on Ukrainian wheat imports. They include Libya at 43% and Bangladesh at 28%. Without adequate affordable import substitutes, cities in some developing countries are likely to face a severe famine.

Food shortages and the rise in energy prices, caused by the fighting, have limited the production of more and more countries. The US, the EU, Argentina, and Turkey have experienced serious price increases, and the inflation rate in Europe and the US has reached its highest in 40 years. If we continue, will Elon Musk’s prediction of an economic crisis “maybe happening around spring or summer 2022, but no later than 2023” become a fulfilled prophecy?

Over the past two years, more than 6 million people have died from Covid-19. Many Western countries have opened up and announced that they will no longer isolate patients with the coronavirus. But as a World Health Organization expert has warned, this is too optimistic. Covid-19 is not over, and deaths still occur. Since last month, the number of infections has soared, and about 1,000 people die from Covid-19 every day. People believe in the vaccine and the idea of coexisting with the virus. But can it prevent more deaths? Can medicine and vaccines keep up with the speed of virus mutation? All of this is still unknown.

No one expected that the hottest global consensus in 2021, ‘climate change’, would be almost forgotten in 2022. Russia's military intervention suspended cooperation and split the world, perhaps at the loss of the last chance to unite to resolve the climate disaster. Icebergs melt, sea levels rise, small islands disappear, natural disasters occur frequently, the world continues to fight, and mankind seems to be getting closer and closer to the ‘day after tomorrow’.

There’s a grim mathematical problem popular in cyberspace: In American rendering, the sum of every two digits of the starting dates of World War I (07/28/1914), World War II (09/01/1939) and the Russia-Ukraine conflict (02/24/2022) are the same. This is just a great coincidence, but it serves as a reminder to compare the dangerous evolution of the Russian-Ukraine conflict with the two worst wars in human history.

Looking back, tragedies often come from five sources: War, famine, economic crisis, pandemic, and climate disaster. In spring 2022, people didn’t expect that the five aspects would be experiencing unprecedented resonance. The world may be on the eve of its most dangerous moment.

What should we do? Perhaps it is time to revisit President Franklin Roosevelt’s words: “More than an end to war, we want an end to the beginnings of all wars.”

This article was first published by Valdai club

Interventionist US Ambassador in Tirana under pressure

Over half of Germans oppose boosting military aid for Ukraine...

US to disburse $3.5bn of frozen Afghan funds

How Yemen’s Cold War-era revolution set the stage for today’s...