East Germans are less willing than their Western peers to suffer a sanctions backlash in order to stick it to Russia, a new poll says Read Full Article at RT.com 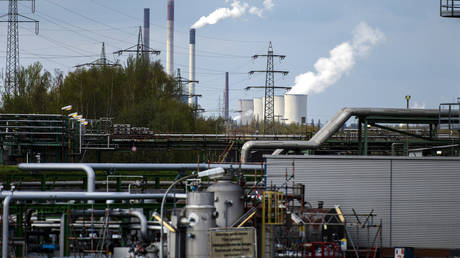 Inhabitants of East Germany are less willing to accept the idea of making sacrifices for the war in Ukraine than their countrymen in the West, according to a poll conducted by Eon Foundation published on Saturday. While an overwhelming majority of Germans – 71% – said they were concerned the new EU sanctions against Russia would cause lasting damage to the German economy, most believed the economic punishment was necessary.

Nearly two thirds (64%) of West German respondents said they were willing to do without energy from Russia, even if it meant fuel scarcities, the poll, which surveyed 10,000 Germans, revealed. However, less than half (42%) of those in the East were willing to support such a plan.

“Workers are the most worried. The rest are afraid of the economic consequences for their lives and work, but to a lesser extent,” pollsters Civey Public Opinion Institute reported.

Similarly, between 55% and 70% of West Germans accepted the idea of turning down the thermostat and driving less as solutions in the event of an energy shortage, while less than half of those in East Germany (excluding Berlin) accepted that idea.

To replace Russian gas, East Germans favored using locally-mined coal, while West Germans preferred solar and wind energy. While numerous experts have cautioned there is no way for Europe – especially Germany – to wean itself off Russian fuel in a single year, given that 40% of Germany’s gas comes from Russia, hope springs eternal in the minds of some politicians.

But despite the Russophobic ideological fervor that has arisen from the conflict in Ukraine, Germany still heats half of its homes with natural gas, and major industries such as chemicals, mining and pharmaceuticals rely on Russian imports to keep the lights on. The CEO of chemical giant BASF warned that transitioning from Russian natural gas to alternative energy or even another supplier would take at least four years, implying that the rush to ditch Russian gas by the end of 2022 was a pipe dream.

Five of the top German economic research centers warned last week that the country could lose as much as $238 billion (€220 billion) in GDP in two years, more than 6.5% of annual economic output, and suffer the highest inflation in modern history. Meanwhile, German Trade Union Confederation head Reiner Hoffmann has warned an EU-wide embargo on Russian oil and gas will hit the German economy much harder than Russia.

Not only will the ban “not affect events in Ukraine,” Hoffman told German broadcaster ARD last week, but it “will lead to a significant decline in the labor market” and trigger “the collapse of all supply chains.”

Taiwan reaches out to India

Thousands of Tories want Boris Johnson back in the game

What comes next in Ukraine’s fight against Russia