Bird poops on Joe Biden as he blames Vladimir Putin for US price hike Read Full Article at RT.com 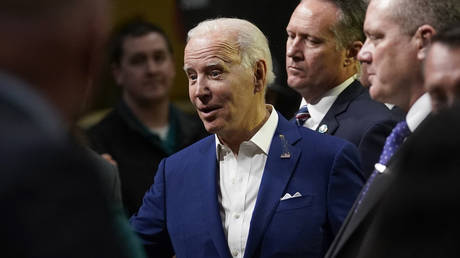 US President Joe Biden’s latest speech has quickly become a social media sensation, after he was apparently pooped on by a bird while addressing the soaring inflation in his country, which he once again blamed on Russian President Vladimir Putin and the conflict in Ukraine.

Speaking out of a barn in Menlo, Iowa, as part of his “rural infrastructure tour”, Biden announced that his administration had decided to suspend a federal rule that prohibits the sale of E15 gasoline, which contains a higher amount of ethanol, in an effort to curb rising fuel prices.

“I’m here today to talk about what we’re doing to lower costs for American families and put rural America at the center of our efforts to build a future that’s made in America,” said Biden right before he was struck by what seemed like bird feces. “That’s not hyperbole!”

During the speech, Biden, for the first time, publicly accused his Russian counterpart of genocide, telling the attendees: “Your family budget, your ability to fill up your tank, none of us should hinge on whether a dictator declares war and commits genocide a half a world away.”

He later doubled down on his words, telling journalists that he “called it genocide because it’s become clearer and clearer that Putin is just trying to wipe out the idea of even being Ukrainian.”

But while the unprecedented accusations are no laughing matter, some social media users had a hard time taking the US president seriously as something that looked like bird excrement could be clearly seen on his blue suit, right above a US flag lapel pin.

Apparently, Biden himself didn’t notice the white splatter, and his staff didn’t seem to inform him, as the president continued his address and later mingled and took photos with people while still covered in apparent bird poop.

White House Communications Director Kate Bedingfield later took to Twitter and disputed the idea that the offending material was bird feces and insisted it was corn. Bloomberg correspondent Justin Sink agreed, saying that “it was bits of corn flying around from the corn silo; the event was indoors.”

But whether or not it was bird poop, a number of Biden’s critics saw the incident as an opportunity to take yet another stab at the president, whose approval ratings have dropped to 41% amid the ongoing price hike in the United States.

"A bird pooped on Biden during his speech today... And I'm sure Psaki will say it was Putin's fault," wrote comedian Tim Young.

A bird pooped on Biden during his speech today... And I'm sure Psaki will say it was Putin's fault. pic.twitter.com/OvsbTeAQEJ

"Apparently birds are also not supportive of Biden's latest gimmick to distract from the damage of his bad policies," tweeted GOP communicator Matt Whitlock.

Apparently birds are also not supportive of Biden's latest gimmick to distract from the damage of his bad policies. https://t.co/SEGAMyxG5P

Despite the blemish, the attendees of the speech gave the president a standing ovation, and the state's Republican leaders praised Biden for his decision to allow the sale of E15 gas, as Iowa is the country’s leading producer of ethanol.

Sanctions on Russia are screwing up the world

Why China is giving Britain the cold shoulder